Healthcare professionals are critical to our society. It’s their job to try to keep us healthy, heal us when we’re ill or injured, and care for us when we can’t care for ourselves. The vast majority of times, these people help their patients and their families and the story ends happily ever after. Unfortunately, mistakes are sometimes made and patients suffer serious and sometimes fatal injuries because of the negligence of healthcare providers.

Alderman & Hutcherson helps those harmed by medical malpractice. Medical malpractice or medical negligence cases are complex and require an in-depth investigation, consultation with medical experts and a legal team willing and able to make sure the client’s interests are protected and their legal rights to compensation are maintained.

Estimates of the number of deaths caused by medical mistakes vary widely but are still shocking.

The plaintiff (the party filing the lawsuit) needs to show the following:

Medical experts play a critical role in medical malpractice cases. The expert must practice in the same field of medicine as the health care professional accused of causing the harm. This expert reviews the plaintiff’s medical records, and based on their education, training and experience renders an opinion as to whether the healthcare professional deviated from the standard of care and skill exercised by healthcare professionals generally under the same or similar circumstances. Such an expert would then provide the following services:

There are almost a limitless number of possible conditions for which medical treatment is needed and any number of ways a person can be examined, tested and treated. A patient may be cared for or tested by a range of professionals, including paramedics, nurses, radiologists, pathologists, doctors and surgeons. At any time during treatment, a mistake by any one or multiple professionals could result in an injury and be the basis for a medical malpractice claim. 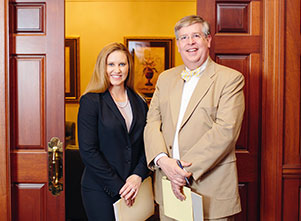 If you believe that you or a family member has been the victim of medical malpractice, contact Alderman & Hutcherson so we can discuss the medical treatment, the mistakes that happened, how the law may apply and the best ways to protect your legal interests and rights to fair compensation. Call (478) 476-9110 or use our online contact form to schedule a confidential consultation with an experienced Georgia medical malpractice lawyer.